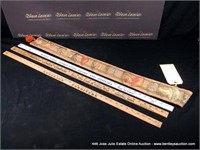 Online Auction – Internet Bidding Only – Live – Live Internet Bidding Ends Monday, August 11, 2014 at 7:00 PM MST (Soft Close)
FOR IMMEDIATE RELEASE For additional information, photos and interviews, contact Joe Castel at 563-271-6473 or joecastel@hotmail.com PROCEEDS FROM AUCTION TO SUPPORT DOCUMENTARY ON LGBT RIGHTS ACTIVIST JOSE SARRIA Bentley's auctioneers will conduct an online estate auction of Jose Sarria, Empress I, The Widow Norton, from August 1 to August 11, 2014. The auction proceeds of nearly 2,000 valuable artifacts, including rare jewels, all belonging to the founder of the Imperial Court System (ICS) will go to fund a documentary about the activist's life. To view the Lots, go to Bentley's at: http://auctionsouthwest.hibid.com/catalog/42766/jose-julio-sarria-estate-online-auction---July-2014?tab=0 Sarria passed away in Los Ranchos, New Mexico August 19, 2013, at the age of 90. "Jose was a collector of fine jewels, coins, antiques and oil paintings," said Sarria's executor Tony Ross. "This is a great opportunity to own a bit of LGBT history and for the gay community to support a documentary long overdue on one of our unsung heroes." Award winning Los Angeles filmmakers Dante Alencastre and Daniel Carrera are in pre-production on Sarria's documentary "Nelly Queen," slated to be released in 2015. Sarria was the first openly gay candidate to run for public office in the United States in 1961, more than a decade before Harvey Milk. When San Francisco city officials vowed to shut down all the gay bars in 1961, the 38 year-old cabaret singer ran for a seat on the Board of Supervisors. Although Sarria lost the election, he garnered nearly 6,000 votes, proving for the first time in American politics that there was a gay voting bloc. Speaker John A. Pérez of the California Assembly noted that "Jose Sarria's trailblazing run for public office as an openly gay man laid the groundwork for LGBT Californians to run for public office proudly and openly. But Jose's refusal to be silenced or shamed back into the closet--in an era where LGBT People were routinely discriminated against--was the greatest contribution to our movement." In 1965, Sarria founded the ICS in San Francisco when a group of gay bar owners formed a Tavern Guild as a means to stand in solidarity with one another under the pressure of police harassment. The Guild put on the first large public drag ball in San Francisco's history. The following year, Sarria declared himself Absolute Empress I Jose of the newly formed nonprofit. ICS was intended mainly for "camp" fun as its members derived royal titles and elected Empresses and Emperors at annual Coronations. However, under Jose's guidance the organization grew to 70 chapters, making it the second largest LGBT nonprofit corporation in the U.S., and since its inception has raised millions of dollars for AIDs organizations and other charities. -more- -Sarria Auction Continued Sarria was born in San Francisco in 1923, to parents of Colombian and Nicaraguan descent. He served in combat during World War II and was honorably discharged with the rank of sergeant in 1949. When the decorated veteran returned home from Europe, he found that the war on gays was just heating up as vice squads routinely arrested patrons at the Black Cat and other clandestine gay bars. Sarria's dream of becoming a teacher was shattered after his own arrest on trumped up "lewd and lascivious" charges. Knowing he was ineligible to teach with a "sex deviant" record, Sarria dropped out of San Jose State University and began waiting on tables at the Black Cat Café in the city's beatnik section of North Beach. "They labeled me a fairy, so I was going to be the fiercest fairy they'd ever seen," Sarria often recalled. As a drag performer, Sarria made good on his promise of being the "fiercest fairy" the city had ever seen by turning the Cat into a rallying place for closeted gays seeking refuge from an oppressive society. He sang torch songs in his tenor voice accompanied by a honky-tonk piano. On Sunday afternoons the diva performed one man opera parodies, replacing the straight love story for a gay one. For nearly a decade, until the Cat's closing in 1963, Sarria played Carmen, Aida, or Madam Butterfly to sell out crowds of 300 people. When the vice squad entered the café to entrap patrons, Sarria exposed them by having his audience stand up and sing "God, Save Us Nelly Queens," a takeoff on Britain's national anthem. Sarria preached hope to his patrons with such slogans as "Gay is good, the crime is getting caught!" and United we stand, divided they'll catch us one by one!" Sarria's heir apparent to the ICS, Queen Mother of the Americas, Nicole the Great summed it up best, "Jose is the Rosa Parks of the gay movement. The auction proceeds will support the documentary which in turn will help cement our founder's sovereign place in history."
Bidding Notice: CREDIT CARD AUTHORIZATION FORM: Effective January 1, 2014, all online bidders will be required to fill out a Credit Card Authorization Form before their Absentee bids will be accepted OR before they are allowed to bid live via Live Auction World. This is required for each auction.
Location
Amarillo, TX
Details
Auction Details
Catalog
View Catalog (1816 Lots)
Credit Card Authorization
Credit Card Authorization
Single Page

No bids found for this item

In the case of a tie bid, precedence is given to the earliest bid

Your Max Your Bid

Your Max Your Bid

Your Max Your Bid
Click to add notes.
Notes saved

Email Privacy Policy We have created this email privacy policy to demonstrate our firm commitment to your privacy and the protection of your information. Why did you receive an email from us? If you received a mailing from us, (a) your email address is either listed with us as someone who has expressly shared this address for the purpose of receiving information in the future ("opt-in"), or (b) you have registered or purchased or otherwise have an existing relationship with us. We respect your time and attention by controlling the frequency of our mailings. How we protect your privacy We use security measures to protect against the loss, misuse and alteration of data used by our system. Sharing and Usage We will never share, sell, or rent individual personal information with anyone without your advance permission or unless ordered by a court of law. Information submitted to us is only available to employees managing this information for purposes of contacting you or sending you emails based on your request for information and to contracted service providers for purposes of providing services relating to our communications with you.

The email address {0} has been subscribed to the email list.

Oops, there was a problem.

I was unable to add your email address to the email list. Please check your address and try again.

Oops, there was a problem.